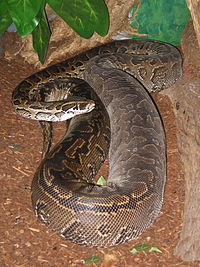 It’s with a heavy heart that we share the news that everyone is or has been talking about. Monday an unbelievable tragedy struck Reptile Ocean Inc of Campbellton, NB. An African Rock Python (Python sebae) is reported to have asphyxiated two young boys age 5 and 7 after escaping its enclosure through a ventilation system. Our condolences and thoughts go out not only to the family whom lost their children but also, Reptile Ocean Inc. No one outside of the incident can possibly have enough information to speculate on anything. This is a tragic accident that no one could have predicted.

“On August 5, 2013, shortly after 6:30 a.m., police officers with the Campbellton RCMP responded to an apartment on Pleasant Street in Campbellton, where the two boys were found deceased. The boys had been sleeping over at the apartment of a friend, which is located above a reptile store.

The preliminary investigation has led police to believe that a large exotic snake had escaped its enclosure at the store sometime overnight, and got into the ventilation system, then into the upstairs apartment. It’s believed the two boys were strangled by the snake.

The snake was captured and is in RCMP possession.

The investigation into what happened is ongoing, and the RCMP’s Forensic Identification Section is assisting. Autopsies will be performed on the two boys on August 6 in Saint John.

Many people want to speculate on what the impending legislation will be in regards to reptile ownership in Canada and specifically in New Brunswick. Canada is already much more restrictive on what can and cannot be owned as far as exotic species compared with the United States. To speculate that there will be political action is a moot point. We as an industry can do nothing to predict what legislation may come if any at all. Yes, I said if any at all.  What we can do in the meantime is this, make sure that the people we encounter daily understand that this was in fact a horrible anomaly.

Numerous media organizations and certain anti-pet organizations often take occurrences like the above tragedy and try to appeal to the fear that some of the general public has of reptiles. What I would like to point out is the following.

According to History Lists an average of 20 people a year are killed by horses.

From 1990-2012 there were a total of 10 captive constrictor related fatalities according to REXANO.

Numbers don’t lie as they say. We can see now that more people are killed by horses than constrictor snakes. See more about reptile myths.

Reptile behavior is somewhat still a mystery to us as humans. We can for the most part sometimes predict with accuracy how a specific reptile will behave. This is based on our shared experiences as keepers. However, for anyone to say any reptile wouldn’t do something without a shadow of doubt is just ludicrous. Yes there are ‘typical’ patterns of behavior as we’d mentioned. This doesn’t mean that the reptile we are speaking of is incapable of deviating from what we as humans consider normal behavior. Reptiles are cognizant creatures which make informed decisions based on their scope of sensory information and their prior experience but they also have ‘personalities or traits’ which make them individuals.

At this time, as we’ve stated before our condolences and thoughts go out to everyone involved in the tragedy. It’s easy to be a speculative keyboard warrior and post comments when you’re not involved with the situation. It’s also easy for humans to look for an immediate place to throw blame and talk about how

“This would have never have occurred at ‘my facility’ and other such drivel.”

We are not capable of predicting such things. That’s the bottom line. We’d like to suggest educating the public instead of furthering the fears. You can read more about that with Brandon Fowler of Roaming Reptiles over at Reptile Apartment

One Response to Reptile Ocean Inc of New Brunswick Tragedy